Abstract: Although the most important and relevant part of the scientific activity of Dr. Neculai Andrei is related to the design of efficient algorithms and software products for optimization problems, his first book, written in 1983 was devoted to sparse matrices and some of their applications in scientific computing. This is why we decided to present in our contribution some developments that we made in this direction, in the context of Matlab software, and 25 years after Neculai Andrei’s book. The paper presents the design and efficient implementation of some sparse matrix codes for numerical solution of a 2D convection-diffusion-reaction problem, by a preconditioned CG algorithm.

Aurelian Nicola was born on August 17, 1973 in Constanta, Romania. He graduated from University of Constanta – Faculty of Mathematics and Computer Science in 1996 and obtained his PhD in 2005. Since 2006 he has held a lecturer position in Applied Mathematics at Ovidius University of Constanta, Romania – Faculty of Mathematics and Computer Science. His current research interests are: preconditioning techniques for finite element and finite differences discretizations of boundary value problems and iterative methods for solving sparse linear systems. He published 1 book, 1 paper in ISI quoted journal and more than 6 papers in other refereed journals or international conferences proceedings.

Constantin Popa was born on October 10, 1956 in Bucharest, Romania. He graduated the Faculty of Mathematics from University of Bucharest in 1981 and obtained his PhD in 1995. Since 2000 he has been a full professor in Applied Mathematics at the Faculty of Mathematics and Computer Science from Ovidius University of Constanta, Romania, where he is also heading the Department on Computer Science and Numerical Methods. His current research interests are: algebraic reconstruction techniques in Computerized Tomography, preconditioning techniques for finite element and finite differences discretizations of boundary value problems, iterative methods for least-squares formulations of linear systems of equalities and inequalities (projection algorithms), inverse problems – regularization techniques and methods for approximating the minimal norm solution of first kind integral equations. He published 4 books, 25 papers in ISI quoted journals and more than 40 papers in other refereed journals or international conferences proceedings. Some of his results have been cited in more than 25 papers.

are such that a unique solution exists. For

a fixed integer, we discretized the domain 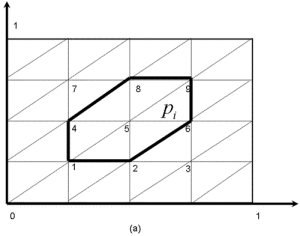 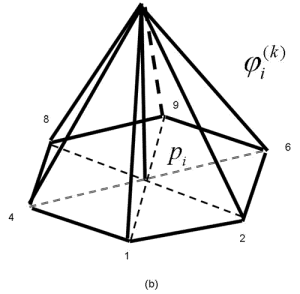 the mesh size of the discretization (see Figure 1(a) for k=2). We discretized the problem (1) by the Finite Element Method, using standard piecewise linear functions

is nonsymmetric, positive definite, big (because the approximation error is of order

, which means that we need an enough big value of

, for an enough good approximation) and sparse (because of the special discretization of the problem domain in Figure 1(a) the matrix

has at most 7 nonzero entries on each row). From these view points, direct methods are not recommended for solving (2). And, unfortunately, the “ill-conditioning” of the system matrix

produces a (very) slow convergence for classical iterative solvers (as e.g. CG; see for details [2, 3, 4]). One way to overcome this difficulty is to consider preconditioning techniques for (2). Such a method will be described in the next section of the paper.