Design and Construction of Link Quality and Localization Protocol Algorithms at WSN over IEEE802.15.4 Physical Protocol

Abstract: This work describes the steps for obtaining two link layer protocols for a wireless sensor network WSN, which functions integrated at single stack. The central axis for the development is the Received Signal Strength Indicator of the signal radio available at the implementation of the radio system in the IEEE802.15.4 standard. The protocols developed are quality link management protocols and positioning and localization protocols. The final results are completed with the protocols time synchronization, topology control and routing for generating a single protocols stack loading at nodes of WSN applied to industrial processes.

Wireless Sensor Network WSN consists of individual nodes capable of interacting with their environment across sensing or physical parameters control; these nodes are collaborating amongst themselves to complete their tasks; tasks they cannot do individually. They use wireless communication for collaboration. In essence, the nodes are shaping a network because they have computer, wireless communication and control or sensing functions [1].

The origin of this work is the need to dispose of a WSN protocols stack whose performance can be considered as a complete object, fundamentally for three reasons:

All network functionality is subordinated to the layer model, those sharing modules at the link andnetwork layer, as shown in figure 1. 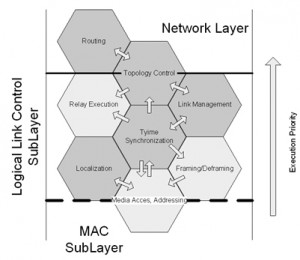 Figure 1 shows the implementation of link management and localization protocols that is necessary for the efficient performance of topology control and routing protocols, as the first step of development, which includes all mentioned protocols. In addition, the time synchronization protocol coordinates the execution of other protocols.

A review on current literature on this issue reveals no evidence of the development of an integral solution, as described in this paper, therefore this work is a new contribution to the field of WSN research.

Each software module contains a protocol that meets a specific function and is related to neighboring modules that share data and information. This allows a sequential machine to be simulated by parallel machine behavior.

In previous works the layer models are raised [4] to watch the phenomena from perspectives not necessarily compliant with the OSI model, or else focused on the data and service perspectives that the network supports.

Also, previous publications have defined protocols with similar functions but they work independently amongst themselves [5][6] without apparent intentions of generating a stack, as is proposed in this investigation. Also the treatment of the link management protocol is poor, especially when it is based on obtaining the Received Signal Strength Indicator (RSSI) parameter that offers a measurement tool for the power of received signals. There remains a doubt about the effectiveness since the errors produced at the lowest power (- 60 dBm or less) require care with the treatment that the existing authors have been justified in using [7]. The author of the investigation produced evidence that validates the use of RSSI and contributes to the WSN layered protocols development.

The link management protocol directly affects other link layer protocols, as well as the network layer protocols, because by knowing the link quality one does not need to spend time and energy in framing, topology controlling and routing.

By respecting localization and positioning modules, there exist multiple proposals [1][8][9][10][11][12][13] y [14], that consider RSSI as a key factor for determining the distance between nodes that permit, by various methods, the setup position of each node into the network. Other methods include the Signal Angle of Reception and the Reception Differential of Time Arriving methods, but in both of these cases it is necessary to pay an additional cost, such as an addressable antenna for the first case and the dedicated clock algorithm which consumes machine cycles, for the second case.

The proposal developed here considers the RSSI, not from the neighboring nodes, but from anchors located at default positions that form an absolute coordinated system. There have been two attempts to develop this [ ][11], but neither attempt considered an absolute coordinated system. In one case a mobile anchor is used and in the other the information about the anchor’s position is incorporated as data into packets that flow across the nodes. Therefore, evidence relative to these cases does exist.

With the intent to validate the hypothesis that the use of RSSI is the most reliable technique with the lowest cost, it is necessary prove in the field what some authors [7][8][16]have suggested through their own research: that that the RSSI at IEEE802.15.4 standard implementations, is between -30 dBm and -90 dBm [17]

To obtain a design according to what we want to achieve, a small network without load is built, in indoor and outdoor conditions and measurements of RSSI were obtained. This network works with nodes built over ZigBee technology, one node connected to a portable computer and another autonomous and mobile node, supplied by batteries.

The data collected through testing is considered as a reference and a justification for establishing a design criterion for an algorithm which would determine a quality link indicator. This would permit other protocols to take decisions of whether or not to do the work. If the decision is negative, then it would generate a timeout until the indicator is reliable.

The positioning and localization protocol is projected using the same RSSI to which applies a trilateralization algorithm. The RSSI was collected from three fixed anchors which mark the absolute coordinates. By computing the Euclidean distances algorithm, where the distances are obtained from the relationship between RSSI and the distance from the emitter, the approximated position into the coverage area from the network is determined.

When the network is operating fully, these protocols should work embedded into a microcontroller with a low memory and processing capacity, which is directly connected to a radio transceiver system ZigBee and the sensor: this set is called a sensor node.

This document is organized into sections; the Section II shows how to plan, organize and execute the testbed that permits the collection of the data, describing exactly the use of devices; later, in Section III the results of the measurements are shown, explaining the relationship with the scenarios in which they were obtained; later, section IV describes the aspects related to link management protocol development and how the quality indicator is deployed. Section V shows what, according to author, is a notable contribution to WSN research, such as the use of anchors or beacons in the construction of an absolute coordinated system, not only for localization processes but, also, for topology control. The Section VI specifies the development criteria and the algorithm for the localization and positioning protocols that use the RSSI parameter as the operational central axis, while the Section VII delivers the remaining challenges for future researches and the conclusions obtained.