Abstract: Distribution network design (DND) attempts to integrate tactical issues such as inventory policies and/or vehicle routing decisions with strategic ones such as the problem of locating facilities and allocate customers to such facilities. When inventory policy decision making is considered the problem is also known as inventory location modelling (ILM) problem. During the last two decades, mathematical programming as well as (meta-)heuristic approaches have been considered to address different DND problem. In this article we consider a hybrid algorithm of Lagrangian Relaxation and artificial ants to solve an ILM problem previously proposed in the literature. We use ACS to allocate customers to a subset of warehouses that is previously generated by the Lagrangian relaxation. Results show that the hybrid approach is quite competitive, obtaining near-optimal solutions within an acceptable time.

The location-allocation problem is an important problem in logistics. The main goal is to find the best possible combination of facility locations (among a set of possible locations) to serve a set of customers, which must be allocated so that their demand may be fully satisfied by the installed facilities. This problem is, clearly, at strategic level as once the decision on what locations should be installed is made, it is very difficult to reverse such a decision because of the time and cost that such changes would imply. These class of problems have been widely studied in the literature ([1, 3, 8, 9, 10, 14, 34), and a variety of techniques have been proposed so far to solve it (for a comprehensive survey please see [21]).

During the last two decades, several authors have pointed out the importance of including tactical aspects such as inventory and transportation decisions within the same model that is used to solve the strategic problems [24, 30, 31, 32, 15, 35, 36, 39]. This is because sequential approaches, i.e. those that solve sequentially the strategic, tactical and operational problems, have been proved to lead to sub-optimal solutions, as the quality of the solution at each level will always depends on the quality of the solutions obtained in previous levels.

When inventory policies are included within the location-allocation model, the resulting model is known as Inventory Location Model (ILM). Several ILM have been proposed in the literature, being the main difference between them the inventory policy that is considered (see Section 2 for a short survey on ILM). In this article, we have considered the ILM proposed by [32].

In their article, authors propose a cross-level model that incorporates a continuous review inventory policy. In their proposed model storage space at each facility is limited and a capacity constraint over the distribution vehicles is applied. These conditions make the problem more realistic as they model common situations in logistics. It also makes this problem harder to solve though. The resulting model is nonlinear and includes both integer and continuous decision variables.

The model considers inventory control as well as facility location decision making. Two capacity constraints are considered: a limit over the size of the lot for the incoming orders to each facility and; a stochastic bound to the inventory capacity. In their article, authors solution approach consists of a Lagrangian relaxation and the well-known sub-gradient method, combined with a simple 2k-opt heuristic. Miranda et. al. [32] highlights the fact that reducing capacity of inventory does not necessarily means that the number of facilities to be installed must increase. In fact, order size reduction leads to an optimal customer allocation, reducing total system cost.

The mathematical model presented in [32] we consider in this study is as follows. Let W be the set of possible warehouse locations and i∈W be the i -th available warehouse in W . Let C be the set of customers to be allocated to selected warehouses i∈W+⊂W . As we mentioned before, a (Qi,RPi) inventory policy is considered. When the inventory level falls below RPi level in warehouse i , Qi items are ordered. LTi time units after the order Qi is triggered the items are received.

This is known as lead time. A probability of 1−α is considered to ensure a level of service for the system. This means that, with probability of (1−α), units below RPi are enough to satisfy customers demand during the lead time. Stock-out is produced otherwise. This leads to the following constraint:

where stochastic demand during lead time at warehouse i is denoted by (SD(LTi)) . Miranda et. al. [32] assumes a normally distributed demand which allows them to determine

Z1−α corresponds to standard normal distribution, Di and Vi are the total demand and the total variance at warehouse i , respectively. Let HCi be the holding cost and OCi be the order cost associated to warehouse i . Thus the inventory cost is

Fi denotes the fixed cost of opening warehouse i while RCij and TCij are the transportation unit cost and the fixed transportation cost between warehouse i and customer j , respectively. Thus, the goal is to minimise the total system cost that can be expressed as follows

where µf is the customer j mean demand, N and M are the number of available warehouses and the number of customers, respectively. Miranda et. al. [32] proposes two constraints associated to order quantity Qi . The first one states the Qi must be less or equal that an arbitrary value Qub . The second one fixes the maximum inventory level for each warehouse as follows

which can be restated as 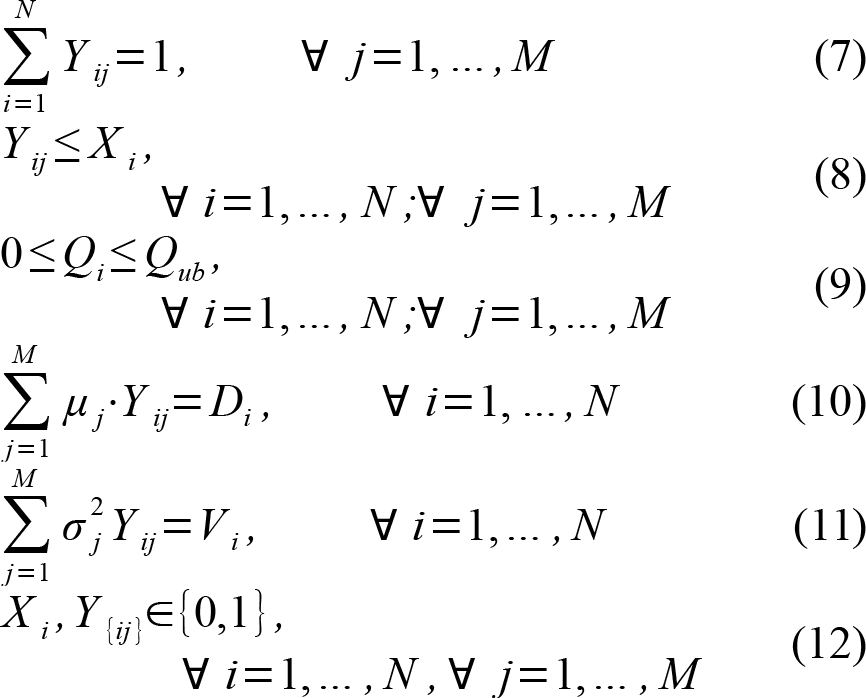 Equation (7) states that demand of customer i is fully satisfied by the system. Equation (8) ensures that customers are allocated only to installed warehouses. Equation (9) provides a valid range for Qi. Equations (10) and (11) set the total demand Di and total variance Vi for warehouse i based on the allocation variable Yij.

Finally Equation (12) states that decision variables X and Y are binary variables, which make this problem much harder to solve.