Abstract: This paper deals with the development of a nonlinear model of a horizontal variable speed wind turbine, the obtaining of an appropriate linear model and the design and analysis of a linear quadratic controller with disturbance estimation. The optimisation criteria will have to define an acceptable compromise between the limitations of the power level in the above rated wind speeds and the maintenance of the aerodynamic properties of the rotor at high solicitations exerted by the wind. The main control objective is to provide an amount of energy that will not exceed the nominal parameters of the generator thus avoiding overheating.

The last decades are characterized by an increase of the interest in the renewable energy sources and consequently in the need of finding control methods for optimizing the energy conversion. Among the renewable energy sources, the wind has become an attractive source of energy, determining in the same time the fastest growth of wind energy technology. Wind turbines are complex systems that function in a dynamic environment, where they risk being struck by lightning, or having ice deposed on the blades, stress, and even fire. But maybe the most important aspect is the variability of the wind. Different attempts to model this variation can be found in [1-3]. For our study though, we will consider the wind as constant in time and any change will be treated as a disturbance.

The studies done so far used either simplified either complex models of the wind turbine. But in most cases, the results concern only linear models [4-5], which are only approximations of the nonlinear models around a chosen functioning point [8]. This paper presents several preliminary results of a study aiming to provide a control solution for electric power limitation at high wind speeds where solicitations are extremely important and can provoke damages of the turbine’s structure. Because one needs prolonging the lifetime of the wind turbines components it becomes imperative in the control design to take into account the tower bending dynamics and the blade flexion modes. A disturbance observer based controller is proposed for estimating the external disturbances and then compensating them by using appropriate feedback. The controller performances are analyzed by numerical simulation for linear and nonlinear wind turbine models.

As it is well known there are many types of wind turbines configurations. From this variety, the ones operating at variable speed are currently the most used because of their numerous advantages. First of all, they are more flexible in terms of control and optimal operation [1], [9]. Secondly, the variable speed operation allows continuously adaptation of the rotational speed of the turbine in order to make the turbine operate constantly at its highest level of aerodynamic efficiency.

The performance of a wind turbine is characterized through its power coefficient Cp that depends in a nonlinear way of two parameters which are the tip speed ratio λ, and the pitch angle of the blades β [10-12]. The tip speed ratio represents the ratio between the tangential speed of the blade extremity

and the speed of the wind v

In this paper, Cp is calculated as

is given in Figure 1. 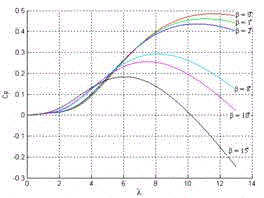 The power coefficient,Cp, appears in the calculus of the aerodynamic torque Caero and the extracted power Paero:

The thrust coefficient is defined as

and its variation with respect to λ and β is displayed in Figure 2.

A complex system can be easier studied if decomposed into subsystems, or its functioning regime is divided into several sub-regimes [6-7]. The wind turbine operation can be decomposed into three main operating zones depending on the speed of the wind. In Figure 3 one can find a typical power curve of a wind turbine.

The first zone comprises wind speeds that vary up to approximately 4m/s. It is considered that bellow this value, the turbines consume much more energy that they manage to produce and in consequence they are not productive, therefore a turbine is started once wind surpasses this value of the wind speed.

In the second zone, (4-12m/s), the turbine starts gradually to produce energy, and to become efficient. The focus falls on the maximization of the extracted power. One tries to determine the turbine to function at a maximal value of Cp.

In the above rated wind speed (12-25m/s), also called high wind speeds area, the quantity of the electrical power delivered has to be limited to the nominal value of the generator in order to prevent its overheating. The most appealing control technique, called “pitch control” acts on the blades of the rotor, and it adjust them towards the feathered position, providing an effective control of the output power. The proposed control algorithm is designed for a wind turbine functioning in this regime.